Note: This article contains detailed information about the process of facial rejuvenation, which is referred to as the non-surgical facelift and thread lift method.

Many of our experiences, such as our sorrows and happiness, in short, the reactions we have due to any emotion, sun damage, environmental pollution, and gravity affect our skin causing sagging of facial contours, wrinkles, and a decrease in flexibility. With aging skin loses its volume. 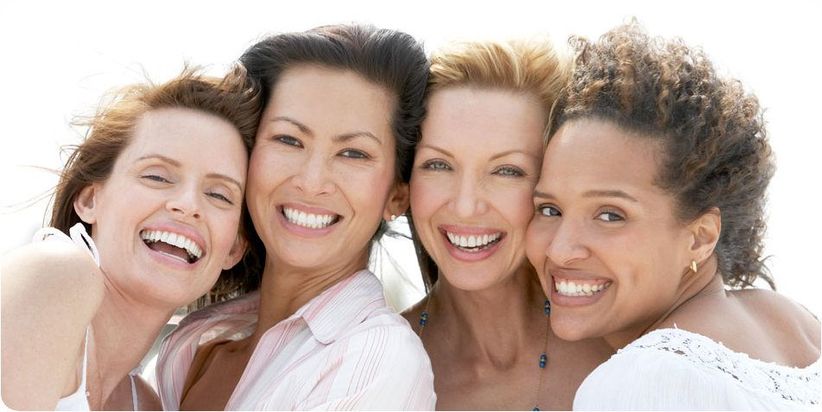 What is a non-surgical facelift (facelifting or thread lift)?

It is basically the process of pulling up the face oval by means of special threads placed under the skin.

First of all, it is important to note that the threads used here are special. They are made of "polydioxanone", a substance that melts in the skin and disappears over time. They contain small hooks or conical protrusions so that the skin is picked up and pull up easily.

It is also known in the market as Silhouette and Ultra V-lift. This method is not a complete alternative to facelift surgery.

If the face sagging is too extensive, they are not very effective. However, this is an option for those who do not want to endure surgery. It is a good solution for people up to 50 years of age whose sagging is not very advanced. It can be applied with simple local anesthesia so that a patient can immediately turn back to social life. This method can be used for neck sagging, as well as to correct the sagging of breasts, arms and legs, and hip lifting.

What are the application areas of non-surgical facelift or thread lift treatment?

This method is effectively used at many sites of the face area, as well as in the neck sags. It is also used to correct the breast sagging, raise the buttocks and thighs.

What are the advantages of the non-surgical facelift? In other words, why should I prefer the thread lift method?

Many people who want to be beautiful and turn the clock back think that going under the knife is a radical decision and are afraid to have a bad experience.

The traditional facelift is a surgical procedure that can have a variety of health risks.

In addition, the possibility of changes in natural appearance after the surgery also pushes off people who are sensitive to this issue. Those who have to work and cannot afford downtime don't prefer surgery either.

At this point, the advantages of non-surgical facelifts are brought to light. Let's list the 8 main advantages: 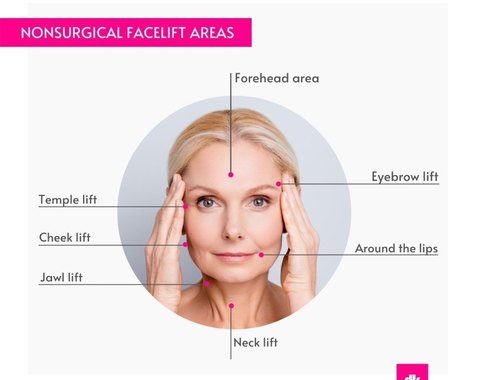 How is the non-surgical facelift (thread lift method) applied?

How long does the process take?

The process takes between 30 minutes and one hour depending on the number of threads to be placed.

This process is also known as ''lunchtime facelift''. This is because the procedure is so short; it can be completed even during the lunch break.

Of course, although the procedure seems simple, just like in surgical conditions maximum sterilization is essential to avoid possible infections.

What are the effects of the non-surgical facelift?

First, the skin is lifted.

Second, PDO, the raw material of the threads, promotes the production of collagen, elastin protein, and hyaluronic acid. They inhibit skin aging, strengthen connective tissues, and are critical for our skin.

A non-surgical facelift tightens the skin and provides elasticity of cheeks, jaw, neck, jowl, and other areas that lose their resilience.

The effect starts in the first 2 months and lasts for several months depending on the metabolism of the person. 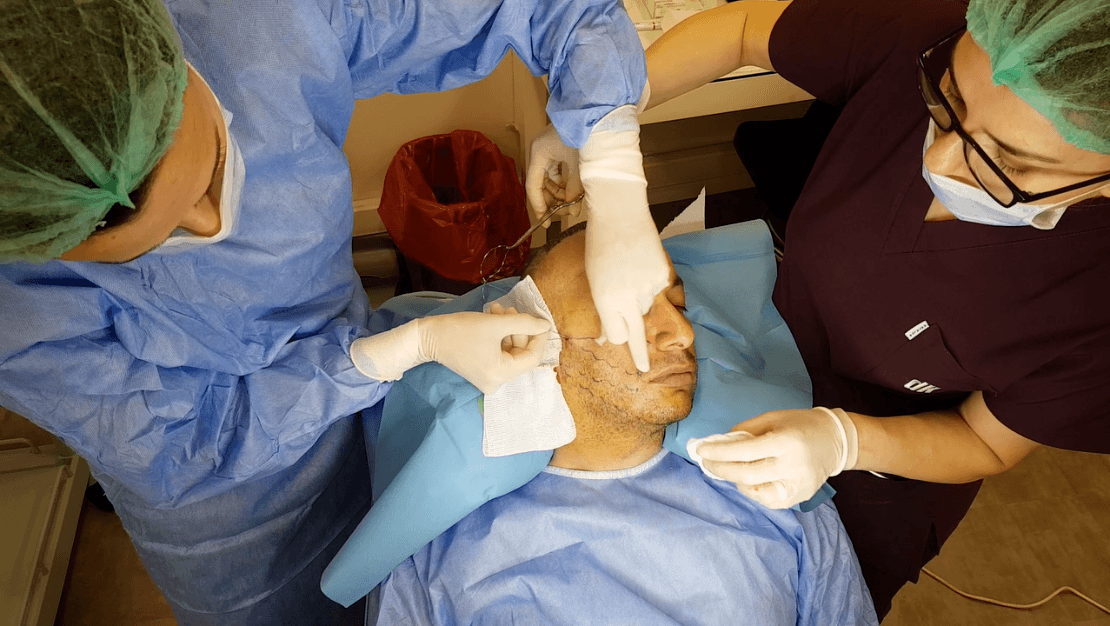 Does everybody have the same effect? Who is the best candidate for the non-surgical facelift?

People between 30 and 65 years of age who have problems with skin elasticity and who want to have a longer-lasting facelift effect than with Botox and fillers without any surgery are the most suitable candidates.

Besides, people in the advanced stages of the aging process are not suitable candidates either. Traditional facelift surgery will give better results to people with advanced aging.

THREAD LIFT - Before and After Gallery

How long does the effect of the treatment last?

The effect of the procedure varies depending on the differences in the individual metabolism rate. In general, it lasts a few years. But at this point the level of knowledge, experience, and practice of the people you entrust to your health matters a lot.

Do I feel pain during the procedure?

The pain perception of treated areas is very individual not only for the non-surgical facelift but for all procedures.

Local anesthesia during the procedure minimizes the pain and discomfort. The process is quite comfortable.

You can watch how the non-surgical facelift (thread lift) procedure is performed in our clinic:

Are there any celebrities who had this treatment?

The non-surgical facelift has a relatively short history compared to other wrinkle treatments, but the high level of satisfaction is particularly interesting for Hollywood stars.

What rules should be observed after the treatment?

Immediately after the treatment, you can see slight swelling, itching, redness. These symptoms disappear by themselves after a few days. We do not recommend dental treatment, facial massage, and excessive sports during several weeks following the treatment. It is also important to lie down on your back for a while to avoid any complications.

What are the possible side effects of thread lift?

The thread lift method does not create any significant side effects in the hands of a well-trained expert. After the procedure redness and sometimes slight bruises can occur in the needle insertion points for several days.

Who should not have this treatment?

People with advanced cancer, diabetes, clotting disorders, infectious inflammation of the skin, people with severe autoimmunity, children, and pregnant women should not have this treatment.

Persons who are allergic to biological substances or are extremely sensitive should also share this information with their physicians and decide whether they are suitable candidates for the treatment. 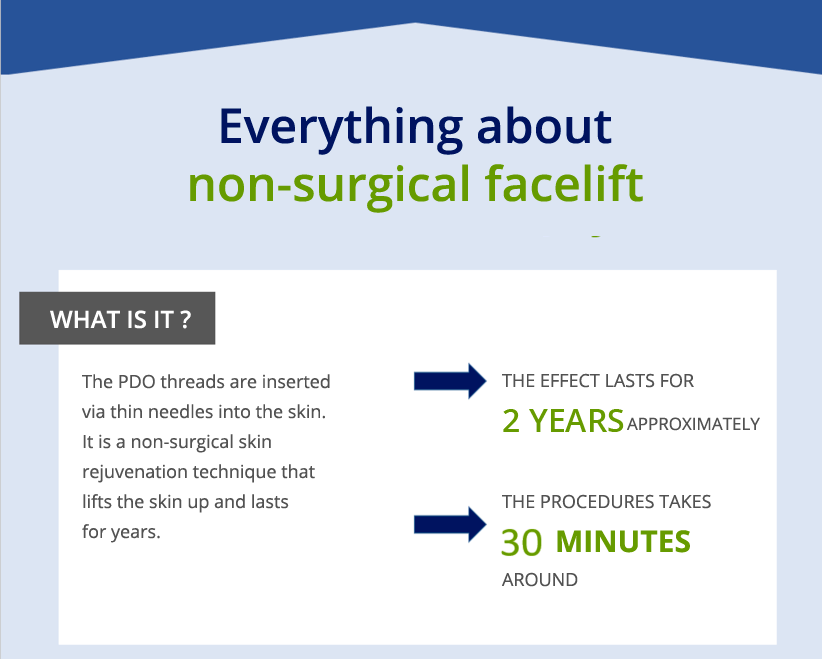 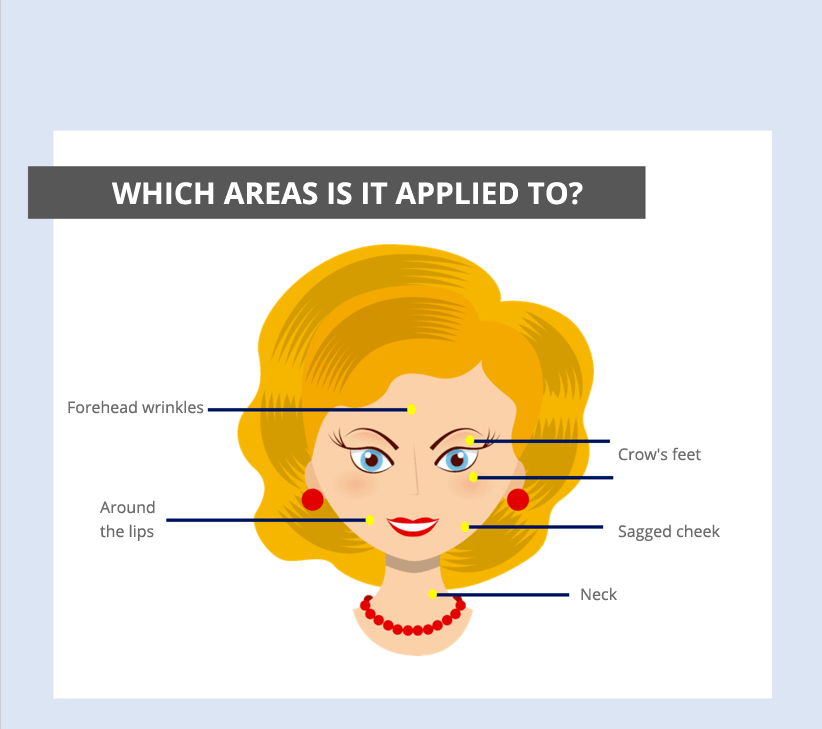 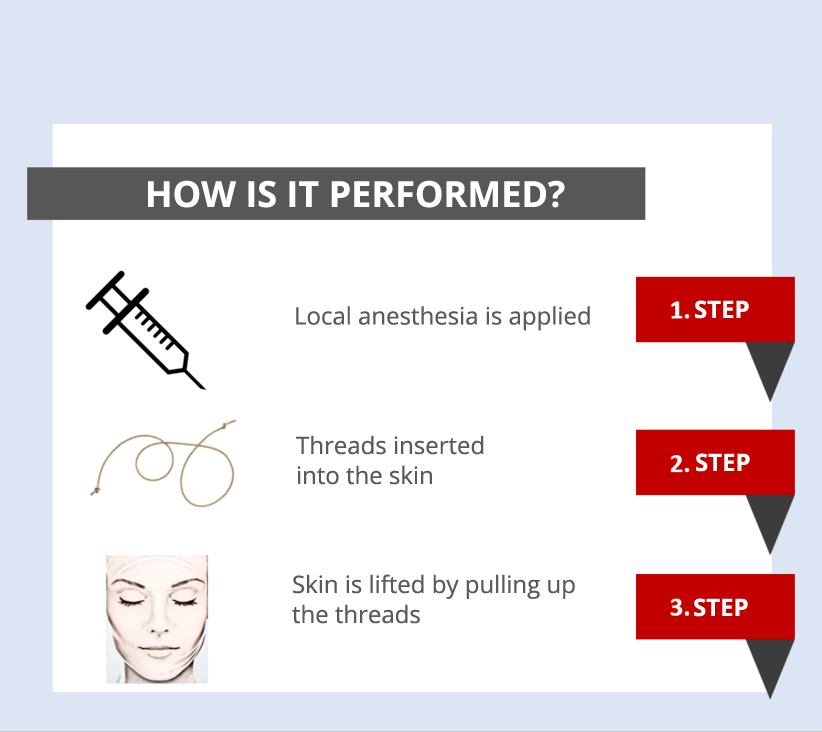 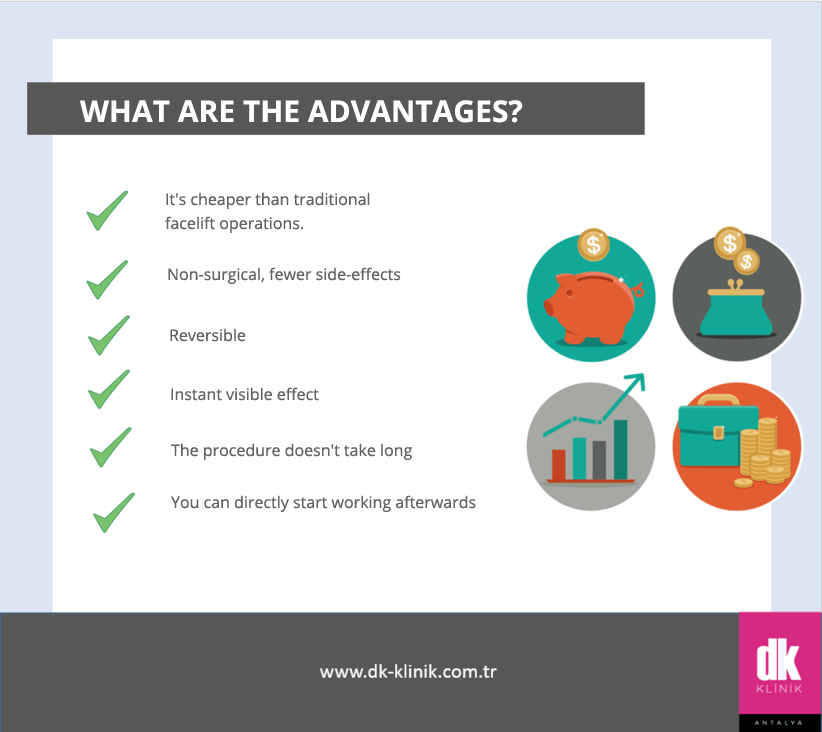